Skip to content
HomeTeacher Strikes Continue: “There is Nothing that can Halt our Revolution” 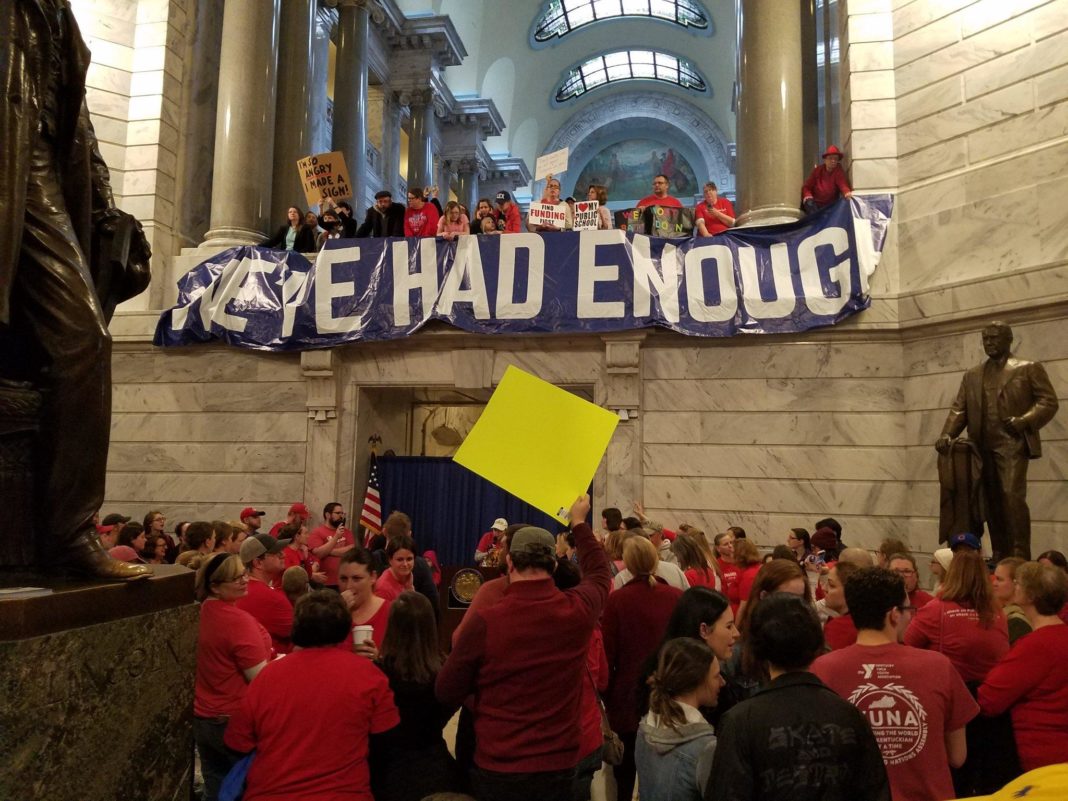 The following statement comes from the West Virginia Industrial Workers of the World (IWW), and discusses the current strike wave in Kentucky, Oklahoma, and beyond.

Nine months ago, rank-and-ﬁle educators across the state of West Virginia began planning insurrectionary, direct action efforts to oppose upcoming reactionary legislation from their state lawmakers. It had become evident at the time that established business unions and their leaders would be incapable of leading workers in this fight, choosing instead to rely on electoral campaigns and endorsements of milquetoast candidates, rather than working to support mass people-power movements.

The results have shown the world that when the power of labor is unencumbered by hierarchies, driven by a singular purpose, and supported through a variety of autonomous networks with a focus on mutual aid, there is nothing that can halt our revolution.

Having learned the tactics of the West Virginia struggle, educators in Kentucky and Oklahoma are currently engaged in statewide strikes of their own, while those in Arizona have plans for future walkouts. In each of these deeply conservative states, where budget cuts and austerity measures have severely damaged the public good in favor of private interests, labor will make its stand in opposition to the dual forces of neo-liberal capitalism and its henchmen.

We have already seen the power of collective labor struggles across both private and public sectors, joining forces under the recognition that, “An injury to one is an injury to all.” From the Communication Workers of America and the United Steel Workers strikes to the struggles of educators in Puerto Rico and Jersey City. Workers around the world have engaged in solidarity actions in support of one another’s strikes, providing material and physical aid where possible while spreading the ﬁre of rebellion.

To #OklahomaTeacherWalkout — stay strong, stay #77United #77Strong from those of us in West Virginia #55United and #55Strong

The West Virginia IWW fully supports the struggles of rank-and-ﬁle educators across Kentucky, Oklahoma, and Arizona to achieve the following:

As the famous labor activist Mother Jones once said, “Some day the workers will take possession of your city hall, and when we do, no child will be sacriﬁced on the altar of profit!” May the workers of this present revolution force the state to reckon with their demands, knowing that their task is one of liberating justice for working people and children everywhere.