Skip to content
Home“Drop ALL the Charges!”: April 2-3, Call-In Campaign for the Remaining J20 Defendants! 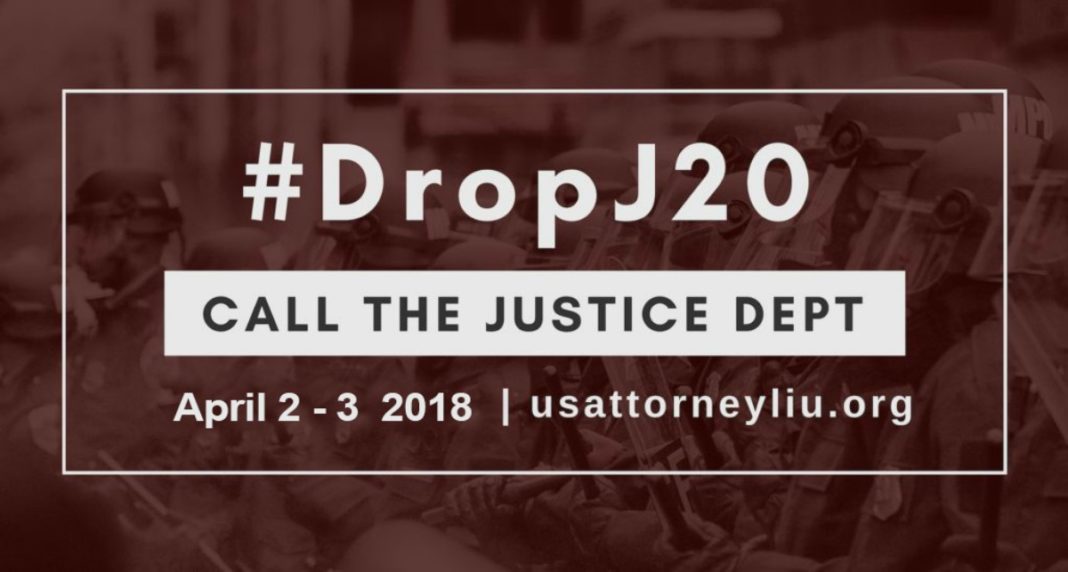 The following is an announcement for a call in campaign to demand that the remaining charges facing J20 defendants be dropped.

On 12/21/17 a jury returned a not-guilty verdict for the first six defendants in the J20 case. Forty-two charges acquitted: twelve felonies, thirty misdemeanors. Subsequently, on 1/19/18, the prosecution dropped charges against 129 defendants. This is a huge victory!

But the fight isn’t over yet as 59 people still face decades in prison; With the next round of trials set to start on April 17th, 2018. Now is the time to keep the pressure on the District of Columbia US Attorney’s Office. We know this is a case of political targeting, and we must demand that the remaining 59 defendants get their charges dropped! We are asking that everyone call the US Attorney’s office from 9am-5pm on 4/2/18 and 4/3/18 and tell them to DROP THE CHARGES against ALL the remaining defendants!

Now is the time to keep up the pressure! The US Attorney’s office can decide to drop the charges at any time; let’s make sure they can’t get any other work done until they do! We’re asking people to call the desks of:

For maximum impact: Make it personal. Why are you upset? Let them respond. Make it a conversation. Ask them what they plan to do in response to public comment. End with a clear call to action. Here’s a sample script to get you started!:

I am calling because I’ve seen in the news that 59 Inauguration protesters are still facing trumped-up criminal charges. In light of the first trial’s outcome–where the judge threw out one charge for complete lack of evidence, and the jury handed down NOT-GUILTY verdicts for the rest, as well as the subsequent 129 dropped cases that followed. — I ask that your office drop the remaining charges.

Over the last year, these prosecutions have pushed every limit:

Most defendants will wait more than a year for their day in court – under the constant threat of decades in prison.

Prosecutors have the choice of when or how to bring charges, and the responsibility for how that power is used. Your office has abused that power to punish, repress, and intimidate.

Note: Some callers to AUSA Kerkoff in January found her to be argumentative, and may treat the call similarly to her courtroom presentation. Please be aware that your calls are likely recorded and we do not advise answering any questions about your identity. Please use your best discretion if referencing anything that occurred on January 20th so as to not negatively impact the ongoing case.