Skip to content
HomeWildcat Roars in West Virginia: Teachers to Stay Out on Strike 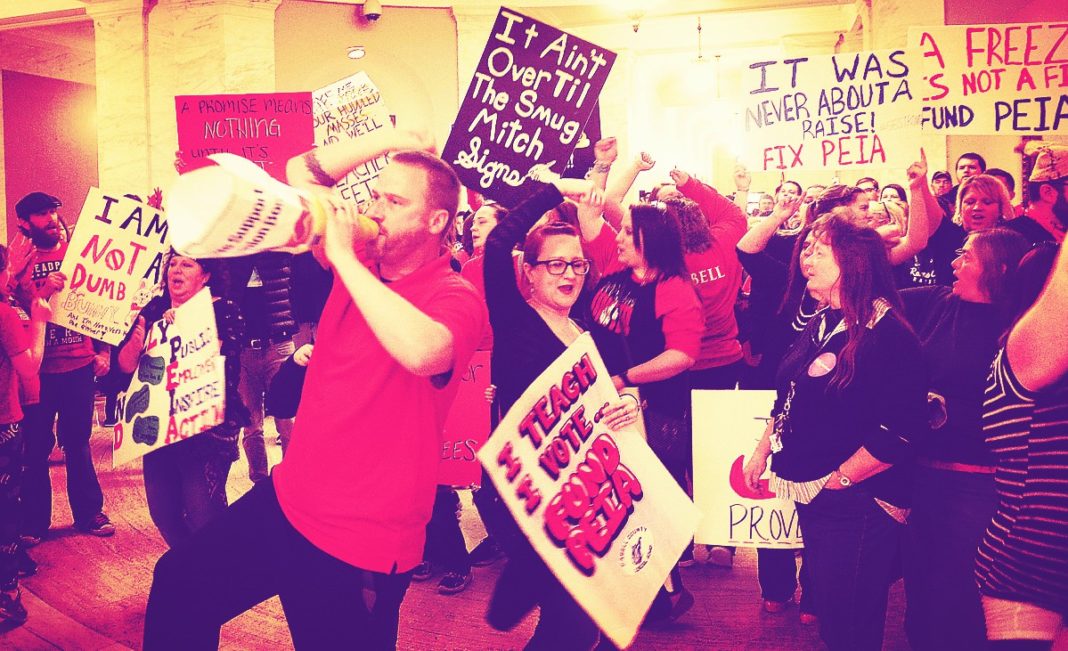 Thousands of teachers, bus drivers, and other school employees across West Virginia defied union and government orders for a “cooling off” period and returned to the state capitol today as strikes and protests continued. Moreover, it appears that many school sites will remain on strike tomorrow, as the strike grows more and more into the hands of the workers themselves. At the West Virginia capitol, the mood remained defiant:

Thousands of teachers descended on the state capitol Wednesday—a day designated by the unions as a “cooling off” period—chanting “We got sold out,” “It’s not over,” “Where’s the union?” and “We’re not leaving.” Signs carried by teachers included, “I just won a chicken on Let’s Make a Deal” and “Cool down day is heating us up.”

Other chants laid the blame squarely on union leadership:

Continuing chants of “A freeze is not a fix!” from previous strike days — alongside new chants of “We got sold out!” — crowds of teachers and other public school workers returned to the state Capitol Wednesday, saying they were not satisfied with Tuesday’s proposal.

@WVGovernor how do you feel about day 6(?) of the huge fuck you this state is giving you?? #55strong https://t.co/3a3iatUdRn

Official! ALL 55 Counties are confirmed to be closed @WVGovernor #55strong

On Tuesday, union leaders, Democrats, and government officials attempted to present an agreement to the rank-n-file that would involve only a 5% pay increase and a freeze on a health care program. This news was quickly met with scorn and seen rightfully so as a sell-out deal by union bureaucrats. In an article publishing on It’s Going Down, striking teachers in the IWW wrote on the situation:

An overwhelming number of public employees on the West Virginia Public Employees UNITED page have voted on a poll in opposition to the current deal. At last count, over 1,000 voters rejected the deal outright, over 400 said the deal was a start but ultimately rejected it, and only 21 said they accepted the deal as is.

Workers in this state have shown the power of rank-and-file control over their counties’ actions, while many brave counties engaged in direct action prior to union leadership’s calling for a statewide walkout. The workers of this state will reject and continue to reject any and all compromise with this reactionary legislature

Speaking to the local press, one worker stated:

“The House and Senate feel like they can starve us out, and we feel like our union leadership caved to that,” he said. Culver said he’s a member of Cabell’s branch of the West Virginia Education Association, but he wasn’t asked or told about the agreement before it was announced.

In response to the continued protests and strikes, schools across the state stated on Wednesday that they would remain closed, and currently it appears that the strike will continue into tomorrow at the very least. According to Jake Jarvis of the West Virginia State Journal on Twitter:

Schools in all of West Virginia’s 55 counties will be closed again Thursday, despite calls from union leaders for teachers to return to work.

Striking teachers continued to fill the halls of the state capitol in Charleston on Wednesday despite the day being billed as a “cooling off” period before schools would reopen on Thursday. Many of them demanded that the unions and legislators get back to the bargaining table to improve a deal they deemed unsatisfactory.

The arrangement Justice rolled out would give teachers and other school personnel a five percent raise, and workers employed by the state a three percent raise. Although it marked progress from the meager wage increases earlier proposed by Justice, the deal did not placate strikers’ bigger concerns over the state employee health care program.

On Twitter, teachers expressed anger at the deal, and remained steadfast to stay out on strike:

I’m one of the teachers! Lot of people are unhappy because, rather than adequately funding PEIA (our insurance), the governor froze it at current rates and appointed a taskforce to look into new funding sources by next year.

I miss my students. I was ready to go back tomorrow. But, we are #55united, #55strong. We are staying out so we can keep teaching and stay in WV, so we don’t have to leave the profession or the state to make enough to get by. I’ll see my students on the picket line!

It also appears that in many ways, the workers are taking over the running of the strike themselves; putting the decision about whether to go out on strike, or go back to work, back into their own hands. This itself is crucial, as for decades in the US, union bureaucrats have attempted to use short and symbolic strikes as a way for workers to blow off steam while making deals with management that largely do nothing to improve wages, benefits, and conditions.

As the West Virginia Gazette reported:

Boone union presidents said employees who came to the state Capitol on Wednesday had taken some sort of vote outside the nearby Culture Center to continue striking.

“After speaking with union leadership this evening, whose membership has reported to them, we do not feel that we will have enough professional and service staff available to keep our system running tomorrow,” Kanawha schools Communications Director Briana Warner wrote in a 7:15 p.m. email.

The Gazette-Mail commented that the strike would continue, “while state union leaders may no longer be fully supporting it.” At a 6:00 pm press conference Wednesday, Dale Lee, president of the WVEA, reiterated, “We believe that the best course of action at this time is to return to work tomorrow,” but acknowledged that “not everyone will.”

Don’t lose sight of @WVGovernor threatening our teachers and his false promise of resolution. We need to be kept in the national spotlight. The #wvteacherstrike is back, and #55strong while public employees still face the serious threats designed to intimidate them back.

The ongoing strike in West Virginia represents a turning point in both class struggle and the labor movement in the United States. Instead of seeing Democrats and union bureaucrats as friends, rank-n-file workers are seeing these ‘representatives’ instead as people who want to contain and manage their struggle. In turn, the rank-n-file is taking control of the strike and making decisions themselves. These organic and autonomous forums and spaces of decision making need to grow to include more workers and begin to coordinate with each other, also reaching out to other workplaces and those in the community as well.

For those looking to support the strike, groups and individuals are encouraged to hit the picket lines and gather resources to give out in the surrounding communities impacted by the strike. We here at It’s Going Down encourage both strikers and supporters to write and contact us about the strike, what is happening on the ground, and efforts to support it.

For more information on the West Virginia Teachers’ Strike, check out our podcast interview with one of the strikers here, ‘Extend the Strike: Build Long Term Power,’ and ‘Teachers Rebel as Union Attempts to End Strike.’