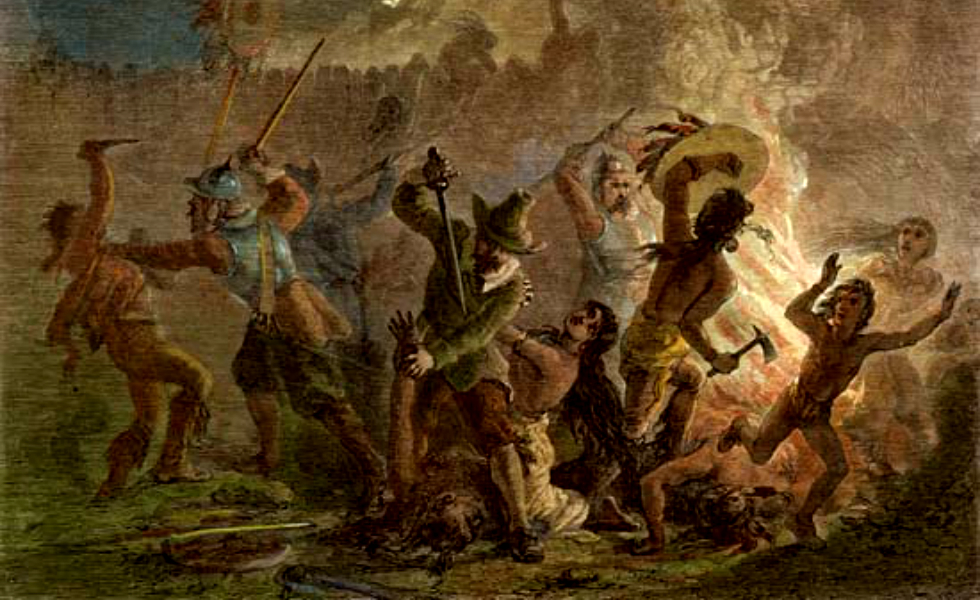 “Learning” about Thanksgiving in our school system for some of us may be the first time we are even told about indigenous nations and people, but it is a false history. Learning about the realities of genocide, invasions, slavery, and war, we come to understand that Thanksgiving is above all, a colonial holiday that literally celebrates military victories and outright slaughter of Native Americans; made into law and custom by the government. It is not the feel good celebration of settler and indigenous relations we are taught to believe.

During a time when Native warriors and their accomplices are risking their lives fighting on the front lines while poverty, mass incarceration, pollution, continued land theft, destructive resource extraction, and abysmal conditions are the norm in many Native communities, let us all remember and reaffirm our commitment to the struggle against colonialism and the settler-State. With this in mind, we are reprinting a list of ongoing sites of Native resistance to resource extraction and beyond.

The Real Story of the First Thanksgiving

Most of us associate the holiday with happy Pilgrims and Indians sitting down to a big feast. And that did happen – once.

The story began in 1614 when a band of English explorers sailed home to England with a ship full of Patuxet Indians bound for slavery. They left behind smallpox which virtually wiped out those who had escaped. By the time the Pilgrims arrived in Massachusetts Bay they found only one living Patuxet Indian, a man named Squanto who had survived slavery in England and knew their language. He taught them to grow corn and to fish, and negotiated a peace treaty between the Pilgrims and the Wampanoag Nation. At the end of their first year, the Pilgrims held a great feast honoring Squanto and the Wampanoags.

But as word spread in England about the paradise to be found in the new world, religious zealots called Puritans began arriving by the boat load. Finding no fences around the land, they considered it to be in the public domain. Joined by other British settlers, they seized land, capturing strong young Natives for slaves and killing the rest. But the Pequot Nation had not agreed to the peace treaty Squanto had negotiated and they fought back. The Pequot War was one of the bloodiest Indian wars ever fought.

In 1637 near present day Groton, Connecticut, over 700 men, women and children of the Pequot Tribe had gathered for their annual Green Corn Festival which is our Thanksgiving celebration. In the predawn hours the sleeping Indians were surrounded by English and Dutch mercenaries who ordered them to come outside. Those who came out were shot or clubbed to death while the terrified women and children who huddled inside the longhouse were burned alive. The next day the governor of the Massachusetts Bay Colony declared “A Day Of Thanksgiving” because 700 unarmed men, women and children had been murdered.

Cheered by their “victory”, the brave colonists and their Indian allies attacked village after village. Women and children over 14 were sold into slavery while the rest were murdered. Boats loaded with a many as 500 slaves regularly left the ports of New England. Bounties were paid for Indian scalps to encourage as many deaths as possible.

Following an especially successful raid against the Pequot in what is now Stamford, Connecticut, the churches announced a second day of “thanksgiving” to celebrate victory over the heathen savages. During the feasting, the hacked off heads of Natives were kicked through the streets like soccer balls. Even the friendly Wampanoag did not escape the madness. Their chief was beheaded, and his head impaled on a pole in Plymouth, Massachusetts — where it remained on display for 24 years.

The killings became more and more frenzied, with days of thanksgiving feasts being held after each successful massacre. George Washington finally suggested that only one day of Thanksgiving per year be set aside instead of celebrating each and every massacre. Later Abraham Lincoln decreed Thanksgiving Day to be a legal national holiday during the Civil War — on the same day he ordered troops to march against the starving Sioux in Minnesota.

This story doesn’t have quite the same fuzzy feelings associated with it as the one where the Indians and Pilgrims are all sitting down together at the big feast. But we need to learn our true history so it won’t ever be repeated. Next Thanksgiving, when you gather with your loved ones to Thank God for all your blessings, think about those people who only wanted to live their lives and raise their families. They, also took time out to say “thank you” to Creator for all their blessings.

1. The Puritans were not just simple religious conservatives persecuted by the King and the Church of England for their unorthodox beliefs. They were political revolutionaries who not only intended to overthrow the government of England, but who actually did so in 1649.

2. The Puritan “Pilgrims” who came to New England were not simply refugees who decided to “put their fate in God’s hands” in the “empty wilderness” of North America, as a generation of Hollywood movies taught us. In any culture at any time, settlers on a frontier are most often outcasts and fugitives who, in some way or other, do not fit into the mainstream of their society. This is not to imply that people who settle on frontiers have no redeeming qualities such as bravery, etc., but that the images of nobility that we associate with the Puritans are at least in part the good “P.R.” efforts of later writers who have romanticized them.

It is also very plausible that this unnaturally noble image of the Puritans is all wrapped up with the mythology of “Noble Civilization” vs. “Savagery.” At any rate, mainstream Englishmen considered the Pilgrims to be deliberate religious dropouts who intended to found a new nation completely independent from non-Puritan England. In 1643 the Puritan/Pilgrims declared themselves an independent confederacy, one hundred and forty-three years before the American Revolution. They believed in the imminent occurrence of Armegeddon in Europe and hoped to establish here in the new world the “Kingdom of God” foretold in the book of Revelation. They diverged from their Puritan brethren who remained in England only in that they held little real hope of ever being able to successfully overthrow the King and Parliament and, thereby, impose their “Rule of Saints” (strict Puritan orthodoxy) on the rest of the British people. So they came to America not just in one ship (the Mayflower) but in a hundred others as well, with every intention of taking the land away from its native people to build their prophesied “Holy Kingdom.”

3. The Pilgrims were not just innocent refugees from religious persecution. They were victims of bigotry in England, but some of them were themselves religious bigots by our modern standards. The Puritans and the Pilgrims saw themselves as the “Chosen Elect” mentioned in the book of Revelation. They strove to “purify” first themselves and then everyone else of everything they did not accept in their own interpretation of scripture. Later New England Puritans used any means, including deceptions, treachery, torture, war, and genocide to achieve that end. They saw themselves as fighting a holy war against Satan, and everyone who disagreed with them was the enemy. This rigid fundamentalism was transmitted to America by the Plymouth colonists, and it sheds a very different light on the “Pilgrim” image we have of them. This is best illustrated in the written text of the Thanksgiving sermon delivered at Plymouth in 1623 by “Mather the Elder.” In it, Mather the Elder gave special thanks to God for the devastating plague of smallpox which wiped out the majority of the Wampanoag Indians who had been their benefactors. He praised God for destroying “chiefly young men and children, the very seeds of increase, thus clearing the forests to make way for a better growth”, i.e., the Pilgrims. In as much as these Indians were the Pilgrim’s benefactors, and Squanto, in particular, was the instrument of their salvation that first year, how are we to interpret this apparent callousness towards their misfortune?

4. The Wampanoag Indians were not the “friendly savages” some of us were told about when we were in the primary grades. Nor were they invited out of the goodness of the Pilgrims’ hearts to share the fruits of the Pilgrims’ harvest in a demonstration of Christian charity and interracial brotherhood. The Wampanoag were members of a widespread confederacy of Algonkian-speaking peoples known as the League of the Delaware. For six hundred years they had been defending themselves from my other ancestors, the Iroquois, and for the last hundred years they had also had encounters with European fishermen and explorers but especially with European slavers, who had been raiding their coastal villages. They knew something of the power of the white people, and they did not fully trust them. But their religion taught that they were to give charity to the helpless and hospitality to anyone who came to them with empty hands. Also, Squanto, the Indian hero of the Thanksgiving story, had a very real love for a British explorer named John Weymouth, who had become a second father to him several years before the Pilgrims arrived at Plymouth. Clearly, Squanto saw these Pilgrims as Weymouth’s people. To the Pilgrims the Indians were heathens and, therefore, the natural instruments of the Devil. Squanto, as the only educated and baptized Christian among the Wampanoag, was seen as merely an instrument of God, set in the wilderness to provide for the survival of His chosen people, the Pilgrims.

The Indians were comparatively powerful and, therefore, dangerous; and they were to be courted until the next ships arrived with more Pilgrim colonists and the balance of power shifted. The Wampanoag were actually invited to that Thanksgiving feast for the purpose of negotiating a treaty that would secure the lands of the Plymouth Plantation for the Pilgrims. It should also be noted that the INDIANS, possibly out of a sense of charity toward their hosts, ended up bringing the majority of the food for the feast.

5. A generation later, after the balance of power had indeed shifted, the Indian and White children of that Thanksgiving were striving to kill each other in the genocidal conflict known as King Philip’s War. At the end of that conflict most of the New England Indians were either exterminated or refugees among the French in Canada, or they were sold into slavery in the Carolinas by the Puritans. So successful was this early trade in Indian slaves that several Puritan ship owners in Boston began the practice of raiding the Ivory Coast of Africa for black slaves to sell to the proprietary colonies of the South, thus founding the American-based slave trade.

Obviously there is a lot more to the story of Indian/Puritan relations in New England than in the thanksgiving stories we heard as children. Our contemporary mix of myth and history about the “First” Thanksgiving at Plymouth developed in the 1890s and early 1900s. Our country was desperately trying to pull together its many diverse peoples into a common national identity. To many writers and educators at the end of the last century and the beginning of this one, this also meant having a common national history. This was the era of the “melting pot” theory of social progress, and public education was a major tool for social unity. It was with this in mind that the federal government declared the last Thursday in November as the legal holiday of Thanksgiving in 1898.

Haul No: Stop Uranium Mining in the Grand Canyon: https://www.haulno.org/

Unist’ot’en Camp: Building a permaculture and healing lodge in the path of pipelines in unceded lands https://fundrazr.com/Contribute?ref=ab_1ECjcn18eTf1ECjcn18eTf

This list is by no means conclusive, check Warrior Publicans, Indigenous Action, and Santa Cruz Indigenous Solidarity for more information about ongoing struggles and campaigns.