Watch the video at: https://youtu.be/PbwFHCnwAr4

The following report comes from the Burgerville Workers Union, who has launched a campaign in the Portland area for higher wages and job place improvements. Less than a week ago, the corporation hired anti-union thugs to attack and harass picketing workers. Solidarity is needed, and people are being asked to call in and demand that this harassment and intimidation end and the corporation negotiate with the union.

On the night of Friday, November 10th, a private security firm hired by Burgerville physically assaulted workers and their supporters standing up for their rights during a peaceful union picket at the Convention Center location. This security firm not only created an intimidating atmosphere through acts and threats of violence but actively and recklessly endangered the lives of everyone who stood up that night for the rights of workers.

The picket itself was part of a long unionization campaign at Burgerville, which has met with intense union busting from corporate. Workers are fighting for living wages, affordable health care, reasonable scheduling, and basic dignity. These demands, however, were answered by Burgerville with violence.

As documented in the video interview above, filmed immediately after the events of November 10th, Burgerville’s private security guards used force to stop a worker at the Convention Center Burgerville, Chris Merkel, from entering his own place of work.

“One of these big burly men,” says Chris, “ran back behind me and bumped me really hard, and I stumbled forward.”

Chris’s manager and a security guard also accused him of trespassing, despite Convention Center being his workplace and despite him being in the store not a half hour before the action.

“That didn’t make any sense to me because I work here,” says Chris. “I’m trying to stand up with other Burgerville workers and members of the community, trying to fight for a better community and a better workplace, and it’s so weird to me that a company like Burgerville would try to intimidate us like that, and physically threaten us.”

Mark describes how the security team laid hands on several people inside the store. As soon as workers and their supporters entered the store, says Mark, a guard “started walking aggressively toward us…and immediately started pushing us back,” going so far as to elbow Mark and shove another picketer.

In a video filmed by the Portland DSA, linked here, you can see evidence of a guard physically pulling a community supporter back by the collar of his jacket.

Acts of violence, however, did not end inside the store. Given the escalation the union moved the action outside, setting up picket lines alongside the sidewalks and off of Burgerville property, where security firm followed them. When a car approached the picket line, a security guard hurried up and “literally pushed people aside…to let the car through,” says Mark, despite not even being on Burgerville property.

Nikki Thompson, also a Burgerville worker, describes the effect of this as “people stumbling into the street” with oncoming traffic, who “almost got hit.”

For Mark, it was the impunity with which the guards acted that was most frightening. When picketers told the guards that they were committing assault, the guards mocked them. Mark felt like they were saying, “We will hurt you and we will harm you, and who are you going to tell.”

Though this is not the first time Burgerville’s security firm has acted threateningly, having come armed with guns to previous pickets, this marks a new, grave escalation in the company’s anti-union campaign.

“They felt like they were powerful and they felt like they could get away with it,” explained Mark, referring to why the guards acted with such aggression. “And until Burgerville acknowledges what they did and changes that, apparently they can.”

Out of concern for the safety of Burgerville workers and the union’s supporters, we feel it necessary to bring this man to the community’s attention. He was responsible for much of the intimidation and physical aggression during Friday’s picket, personally grabbing, shoving, and body-checking multiple workers and supporters. If anyone sees him in their workplace or community, please take precautions, and if anyone has information regarding this person that might help the union keep people safe in the future, please let us know.

We call on Burgerville to acknowledge and answer for the completely unacceptable, deeply unethical, and frighteningly reckless actions taken by this man on Friday. In the meantime, the union will be seeking legal counsel as to how we should proceed.

To all our supporters, we ask you to call corporate today and show the company that Portland will not stand idly by as Burgerville allows its private security to threaten, intimidate, and assault its own workers.

“Hi, my name is [blank], and I’m calling to demand that you, Burgerville, call off your private security and honor the rights of workers to engage in union activity in their workplace and organize for better working conditions. The violent actions of your hired security on the night of November 10th were unacceptable. The Portland community is watching, and will not tolerate your intimidation tactics.” 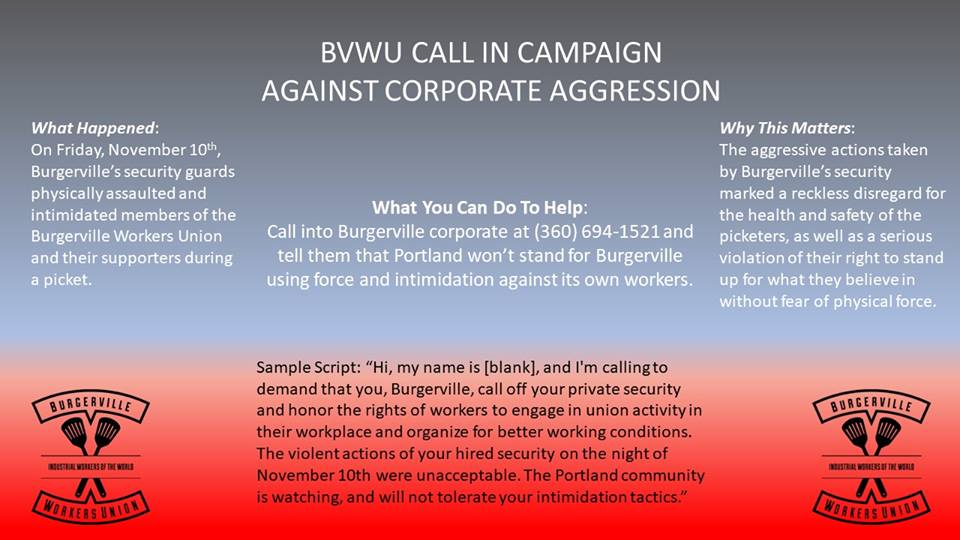