Reposted from The Nation 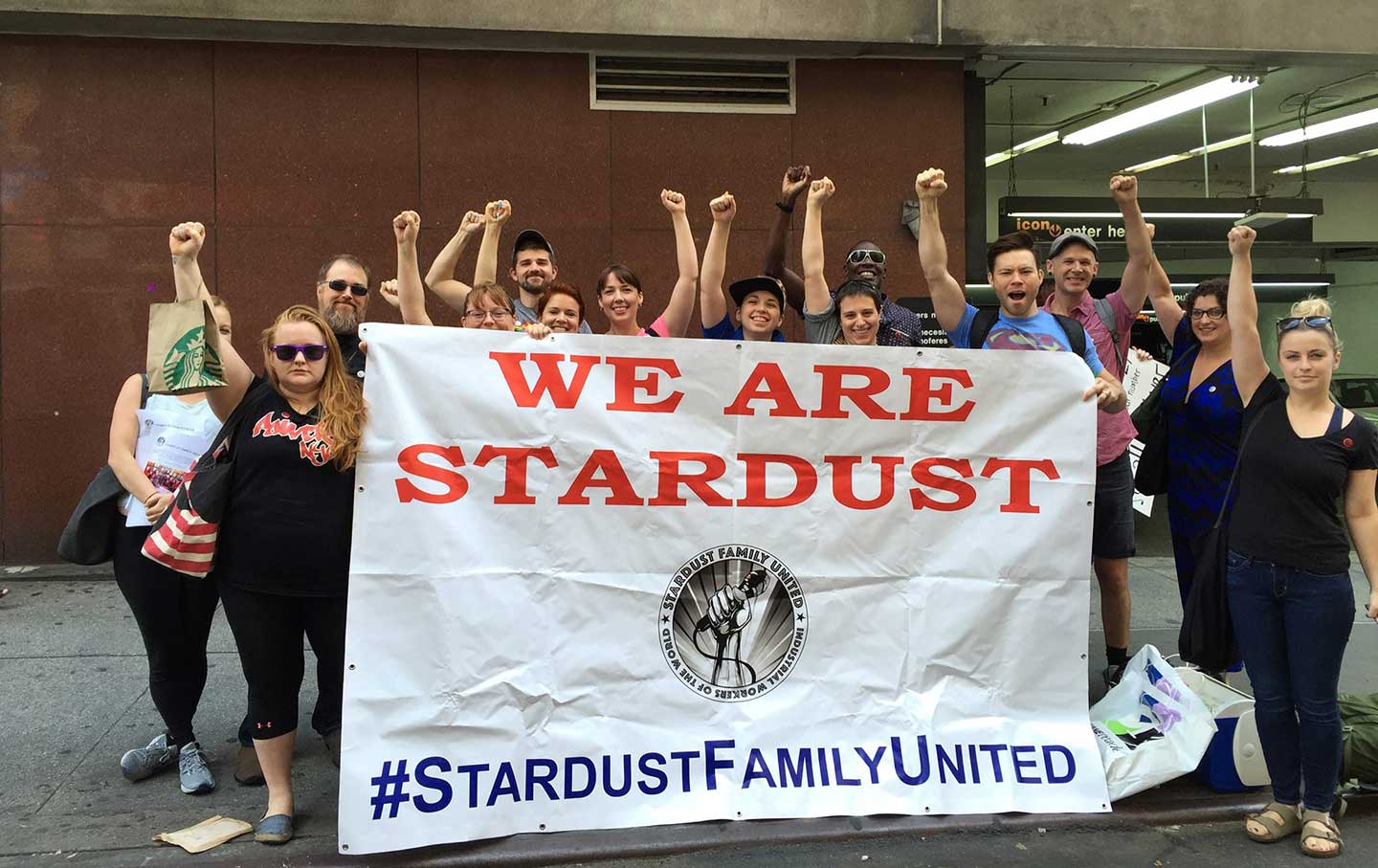 “I vividly remember being so anxious and miserable at work that I was getting drinks for a table, singing a peppy show tune, and crying,” says Meghan Doherty, who worked for six years at Ellen’s Stardust Diner, the Times Square restaurant popular with tourists because of its waitstaff, who perform numbers from Broadway musicals between taking orders. Doherty is just one of more than 50 Ellen’s employees who unionized for better working conditions in August of 2016 and allegedly faced mass firings and accusations of theft in retaliation. Yet, despite these challenges, Doherty and her coworkers are proving that unions don’t have to resign themselves to a slow decline—they just have to be different.

Waitstaff at Ellen’s say that, while they had long suffered from the routine miseries of the restaurant industry, the arrival of a new management team in January of 2016 made their already-poor working conditions unbearable. To the litany of complaints about verbal abuse, health and safety violations, and illegal worker’s compensation denials, employees could now add arbitrary firings, wage theft, intimidation, and harassment. “People were terrified to come to work because they might be written up or fired for not picking up straw wrappers fast enough,” says Doherty. For its part, management denies any wrongdoing: “We have always treated our staff quite well—with fairness, flexibility and respect,” says Ellen’s owner, Ken Sturm, in a statement.

In response to the worsening conditions, Ellen’s staff began casting about for a union to help them. Although they put out many calls, they only received one answer: from the Industrial Workers of the World.

Founded in 1905 in Chicago, the IWW is an international labor union that advocates worker self-organization. With members, affectionately known as “Wobblies,” embracing a philosophy of revolutionary unionism predicated on worker control of industry, the IWW grew rapidly around the globe. According to Wobblies of the World: A Global History of the IWW, the organization had locals in at least 17 countries on all six of the inhabited continents by 1927. At the union’s height, over 100,000 Wobblies were leading campaigns, strikes, and boycotts that were to forever change the working conditions of millions—most famously with the 1912 “Bread and Roses” strike in Lawrence, Massachusetts. No doubt because of this strength, the IWW was also the target of brutal suppression from all levels of government, and membership dropped precipitously by the 1930s. But the Wobblies never quite died out, and their membership rolls have been steadily growing in recent years. Carrying on its history of organizing workplaces that other unions overlook, the IWW has more recently supported employees at Starbucks and Jimmy John’s, as well as undocumented workers, like those of Tom Cat Bakery in New York City. (Full disclosure: The author is a member of the IWW, although he has not been involved in the Ellen’s Stardust campaign.)

Right from the start, the IWW set itself in opposition to the American Federation of Labor (today the American Federation of Labor–Congress of Industrial Organizations). Specifically, the Wobblies opposed the AFL’s roots in craft unionism and its “business unionism.” The IWW saw business unionism as forming a bureaucratic class meant to negotiate with employers and politicians on behalf of workers. Instead, Wobblies strongly advocated what they called “solidarity unionism,” in which workers self-organize to challenge their bosses on the shop floor through direct action. “Solidarity unionism is based on workers’ using their power in the workplace to achieve what they need,” explains Marianne LeNabat, a 17-year IWW member and former New York City branch secretary. “It is rooted in workers making democratic decisions for themselves about how to proceed with their campaign—as opposed to a paid staff member from a union.”

When employees from Ellen’s reached out to the IWW, LeNabat and other Wobblies hosted discussions about workplace problems and led workshops on organizing to achieve solutions. But, significantly, the decisions regarding what to do and how to do it were left to Ellen’s staff themselves. It can be incredibly demanding for workers to take on the duties of organizers in addition to their professional and personal obligations, but Wobblies see no other way for their interests to be truly represented. So, despite the magnitude of the challenges ahead, more than 50 employees from Ellen’s decided in August of 2016 to go public with Stardust Family United, their branch of the IWW.

Since becoming Wobblies, SFU members have pursued long-term resolutions typical of more traditional unions—such as filing lawsuits and Unfair Labor Practice charges with the National Labor Relations Board—but they’ve also embraced direct action to win immediate goals. They’ve banded together to stage shift strikes, collectively refused uncompensated work, blockaded trucks delivering supplies to the restaurant, and marched on management to reinstate tip buckets (often a full third of their income). Their demonstrations outside of Ellen’s typically featured them serenading customers to discourage them from crossing the picket line. At one memorable picket, workers sang “Happy Birthday” to a boy who was planning on having his party at Ellen’s, cheerfully dissuading him at the last minute. “This would’ve been impossible within a business-union model,” says Amanda Brasher, SFU’s treasurer and a 10-year veteran of the

Management responded to SFU’s going public in 2016 by allegedly launching a drawn-out union-busting campaign. News of SFU’s formation kicked off a ceaseless barrage of anti-union propaganda and crescendoed with two mass firings of known SFU members, including Doherty and Brasher. Sturm claims that these employees were fired for theft (“We want to be clear that these terminations were for lawful reasons that were made clear to the employees in question and have absolutely nothing to do with anyone’s union activity,” he says in his statement), but his evidence of misconduct has been found insufficient by judges on both the NLRB and the Unemployment Insurance Appeal Board. This didn’t prevent Sturm from attempting to sue his former employees in Manhattan federal court—a case that The New York Post reported on by shamefully publishing workers’ photos and names with amounts they allegedy stole, as if they were wanted fugitives.

But solidarity unionism prevailed. “Almost zero percent of the information disseminated in the boss’s union-busting meetings and propaganda applies to solidarity unionism, causing him to spend huge amounts of money in vain,” explains Brasher. Typical anti-union objections to forced dues payments and compulsory membership do not necessarily apply to solidarity unionism. IWW dues are paid voluntarily by members, rather than being deducted from their paychecks, as with most business unions. And because the IWW is not the exclusive collective bargaining-agent for Ellen’s employees, union membership is in no way required. In fact, because the IWW does not claim to be the exclusive collective-bargaining agent, an NLRB election to recognize the union is unnecessary. Yet the IWW retains many of the protections afforded by the National Labor Relations Act, as organizing—with or without winning an election—is considered protected activity. Even now, these distinctions between solidarity unionism and business unionism appear to elude Ellen’s management. “The group saying they want a union has resisted the NLRB vote for reasons only they can explain,” says Sturm in his statement.

And as for the terminated workers, funds for their relief and legal support were provided through SFU dues and self-organized cabaret fundraisers, complemented by donations collected by other local Wobblies and grants awarded by the national organization. It may seem like little compared to the coffers of business unions, but the results speak volumes. Fired workers continued to participate in the union as much as possible, while in-house members were able to rebuild their numbers despite the two rounds of firings. Business unions may have money, but solidarity unions have, well, solidarity.

The particular nature of solidarity unionism also makes it less susceptible to attacks from anti-labor legislation. So-called “Right to Work” laws prohibiting mandatory union dues collection among private-sector employees have been the bane of business unions, but they hardly affect the voluntary associations championed by the IWW. It’s for these same reasons that Wobblies have little to directly fear from the results of the upcoming Supreme Court case Janus v. American Federation of State, County and Municipal Employees, which could usher in public sector “Right to Work” laws to the absolute detriment of the AFL-CIO. (On the other hand, the general weakening of organized labor across the country would, of course, force the IWW to operate in a harsher environment.)

Earlier this month, just over a year since they went public, SFU celebrated their biggest victory yet. Days before the NLRB trial over their firings was set to begin, the restaurant settled, offering the 31 terminated employees reinstatement as well as back pay, with Sturm’s accusations of theft also quietly going away. Doherty has decided to not return to Ellen’s at this time (although she says she may consider it in the future), but Brasher will be among the 13 fired workers immediately going back to the restaurant.

Despite their huge legal win, SFU are adamant about keeping up organizing efforts. As management still admits no wrongdoing and the pain of being smeared in the New York Post remains fresh, Ellen’s employees understand their struggle is far from over. “We are already seeing that this battle is about control, not things,” explains Brasher. SFU’s next steps include demanding a clear disciplinary policy, growing their membership, and establishing a committee to address routine grievances and to form collective action plans.

On a wider scale, there are hopes within SFU to spread the model of solidarity unionism that has won them so much. Despite the difficulties they’ve already faced and the challenges still to come, Brasher is enthusiastic about the possibilities. “I’d like to be a part of establishing something that could improve the lives of my fellow workers throughout the food-service and entertainment industries,” she says. It is a testament to the idea that a unionism based on sincere solidarity can be victorious. And as that principle is winning at one restaurant in Times Square, it could be winning everywhere else too. Because, though customers may show up at Ellen’s to hear their favorite Broadway songs, behind the scenes the workers there are singing a different tune: ‘Solidarity forever, for the union makes us strong.’”